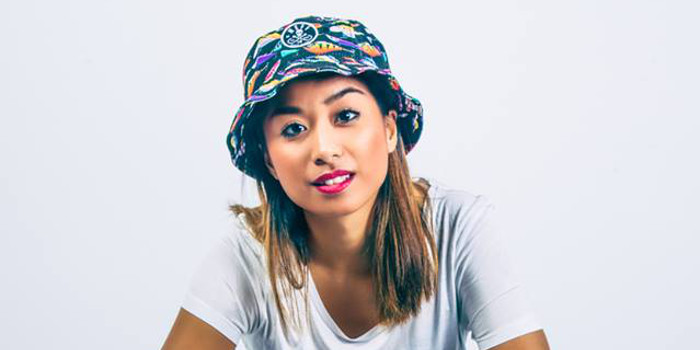 Photo courtesy of The Fifth Picture.
Pour la version francophone, cliquez ICI.
I met Abby two years ago at the Jeremy Passion‘s Belgian gig I helped to set up. We had this mutual friend who kept telling me the whole week before that a Flemish rapper will be there but honestly, I had never heard of her: you know how Belgium feels pretty much like two separate countries sometimes, even when it comes to arts and culture. So, out of curiosity, I checked out her music before the concert.
I don’t even remember having been introduced by our friend but maybe my memories got blurred after a while. I do recall Abegail coming to me and thanking me for organizing the show. Back then, I had already been struck by the fact that seeing her in real life was such a contrast as opposed to the image she was depicting in her music video, or at least what I assumed from it. You know, stupid bias. But when our paths crossed again later, we got to know each other and the more we talked, the more I was convinced this persona wasn’t her. She told me a bit about her life, we discussed her career and the music industry… and this is what brought us here today.
Abby is about to start a new chapter. Actually, I should even say a whole new book, with a preface in two parts: Grow With The Flow and Grown With The Flow, two EPs that she’s currently working on and set to release in February 2015. No more gimmicks: in this open letter, you’re about to discover who she really is. It takes some guts, some honesty and class, and the right words. But Abby has them all.
_______

First off, let me start by thanking you for taking the time out to read this. You could be doing anything, with anybody, anywhere in the world, but you’re here with me reading my story. I appreciate that. It’s been a long time. It’s been too long. How have you been?

Let me tell you about Abby… I grew up in a nice village, decent neighborhood, not too many immigrants. Considering being the only child; my childhood hasn’t been that bad. Far from. You can say I was a silver-spoon-baby. Still, there were enough times I’ve felt like the odd one out. But then again, at times, don’t we all?

I’ve always had a I-don’t-give-a-fuck-attitude about it. Considering, in my mind, I was suppose to always stand out, rather than trying to fit in. Because… That’s how arrogant I get. And I’m good at it. At least, that’s what I like to think. Why? Perhaps, trying to protect myself? In a way I tried to distance myself, enough so no one could hurt me but close enough to stay reachable. Like I would be just like every other kid my age. Just, different. I would make myself important. Make myself matter. Attempting to impress people. Towards irrelevant people that probably wouldn’t even care. Towards people that would only take advantage. Oh, I can’t forget, especially towards those we don’t like. That’s funny, right? Why do we feel the need to do that? I did it because I could. I could because I wanted to. And I wanted to because they said I couldn’t. In the past I’ve really tried hard for people to like me, think I’m cool, look up to me. Maybe even tried too hard.

At least I was focused though. Everything was music. Music, music, music. There were numerous nights I only slept for an hour or 2. I would be up all night, writing, recording. I was getting so close. Tunnel vision. Of course the thought of letting people down has crossed my mind. Multiple times. In a day. For years. I’ve felt sad, embarrassed, I’ve carried a lot of hate, you have no idea. I was young, I was highly influenceable, I would get hyped over everything. And with today’s technology; I did. It was exactly what I did. I made my own hype. Just like every other kid my age: I had a dream. I have done everything in my power to get closer to it. Including lying.

Lying to people I didn’t know, lying to people that matter to me. Selling a story that wasn’t true. Selling a story that wasn’t me. But it was a story people would love to hear/read about and love to believe. I wasn’t true to myself. I was trying so hard to be that artist that everybody wanted me to be. I was releasing music which wasn’t me. I’ve sold myself. People would walk up to me – it would be people I knew, even people I’ve never seen in my life. They would tell me they’ve heard my song on the radio or saw my video on tv, they’d tell me how much they loved it and how great I’ve been doing. Friends would text me every time they hear my music. People I haven’t heard or seen in a long time started contacting me. Fuck, I even got awards for it. Sometimes they’d ask me what’s next, sometimes genuinely, mostly just to be nosey. Most of the time, I didn’t care. Because at that point: I mattered. That shit was good for my arrogance. And even though I seemed confident, I felt guilt. Why was I doing this? Why was I lying to all these people? To myself? What was I thinking anyway. Did I really believe they would let me go on tour, travel the world, having late night studio sessions with a big time recording artist? But I don’t have any hate in me. I used to. A lot. Not anymore. Over time, I’ve learned to let go of it.

Took me a while. I’ve always been one to believe that everything that happens, happens for a reason. For me, there is no need to mention any names. I’m pretty sure that you will know who and what I’m talking about. If you feel addressed, yes, I’m probably talking about you. If not, at least now you know my story. Although things ended on a bad note… There were many memories made. Good ones, bad ones. Many lessons learned. And I’m thankful for the opportunities they had thrown my way at that period of time. Some I screw up, some I accepted arms wide open, some denied wisely. This past half year has been very chaotic for me. Music-wise, family-wise, relationship-wise. But I’m not a person that can carry hate. It’s time. More important to me is that I find happiness in music again. In things I love. In life.

I’ve chosen to leave Abie Flinstone for what it is (well basically because it sounds like a weak ass name for a teenage cartoon superhero and I’m 23 now) and release all upcoming music under the name Maiza. Maiza means the only one in Ilocano, a Filipino dialect. When you’re the only one, you cannot be replaced. Whenever you’re just like others, it will be easy to substitute you. It’s great being number one, because you’re the best. Right now, I’m trying to be unique so I can be greater. So I can be the only one.

Love and all other things in life that are swell,
Abegail/Abby/Maiza
xo