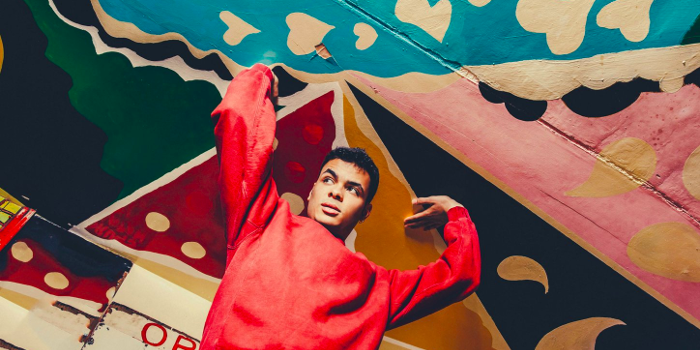 Last week, I was sharing with you my main interview with Ady Suleiman, where he discussed how music inspires his wanderlust and led him to Barcelona for the visuals of What’s The Score?, but also to Jamaica where the Winta James Mix of Running Away has been produced and filmed.

The original version of Running Away has been released today, on June 10, as the first single from the album, produced by Jonny Coffer (Beyoncé, All Saints, Naughty Boy), with a warm and sunny music video shot by Calmatic and Director X in the South African suburb of Langa, in Cape Town. And I can guarantee this will put a GIGANTIC smile on your face!

As much as seeing the world helps you to broaden your mind, other people’s work also allows you to enrich your own art. So now has come the time to sit still for a minute (actually, I hope you have a good hour ahead of you ’cause some of these tracks are longer than 5min!)  to get to know which songs and artists have influenced Ady Suleiman in his life, on a daily basis and on a larger scale!
___

Three songs on repeat in your current playlist?
I’m really bad with the names of the songs. But there’s Pharoah Sanders, Eddie Hazel, Eddie Harris… Oh and BJ The Chicago Kid! But I’ve got really into Pharoah Sanders, massively! But I don’t know what songs I’m listening to. I listen on Spotify, I download all the albums and just play that on shuffle and then comes a tune that I thought was fucking amazing but I can never find again what it is. There’s so much music…

The best song to seduce?
My song or someone else’s? (You can choose!) I mean, I don’t think my songs are seductive so I’ll go with some D’Angelo.

The best song to dance to?
Oh man, I’m going with D’Angelo again! (It’s a classic, everyone answers D’Angelo all the time!) Yeah, for me there’s never a bad time to put D’Angelo on. He always just… Especially Voodoo, that record… If you’re ever struggling, you just play some Voodoo. And actually fucking Leon Bridges! He’s wicked to dance to, he’s got that old school vibe – I love dancing to that!

The best song to wake up to?
I don’t know… It’s so difficult. I know I’m taking ages and it’s supposed to be quickfire (laughs)! This is not quickfire at all! Oh fuck man, I don’t know. This is probably not the one but I’m gonna go with Concrete Jungle by Bob Marley.

The song that lifts your mood up?
Untitled (How Does It Feel) by D’Angelo. This song is just fucking… Especially the end, man – that’s the one!

The song you wish you had written yourself?
Oh, there’s fucking loads but probably Let Me In Your Life by Bill Withers. But if I wanted to be an asshole, I’d go for the one that made the most money!

The song that reminds you of your childhood?
I don’t know the artist, cause it’s an African artist… You’re not gonna be able to find it but my Dad knows cause he used to play an African record and the only bit of English they had in it was ‘fish & chips’ so I called it ‘The fish & chips song’ but I have fucking no idea what it is! If I find it, I’ll send it to you! (It’s Mushroom Soup by Them Mushrooms — thank you Mama & Papa Suleiman <3!)

The song that represents you or your sound the best?
I’m not gonna lie: I really fuck with Quickie by Miguel. I love that song – every time I sing it, I’m like ‘Yeah, this could be an Ady’s song’. Even though Miguel’s music is probably too… straight R&B and I’m not… I can put a little Ady vibe on it!