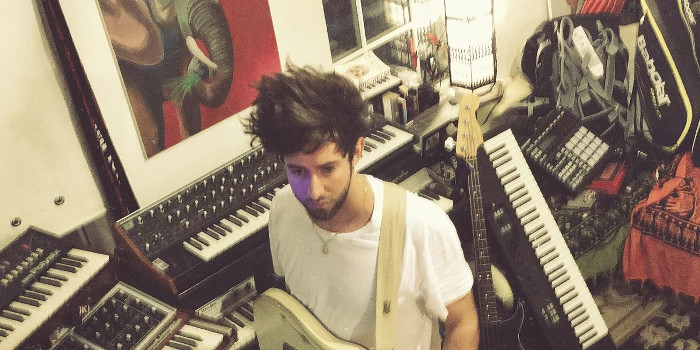 Some people fall in love slowly, others do it all at once. When it comes to music, I’m definitely part of that second category. And earlier this month, I had my heart set on Bruno Major. After giving Spotify‘s Discover Weekly the cold shoulder for weeks, I had decided to check if their radar was back on track… and it wasn’t. Except for a delightful surprise called — yeah, you already know it — Bruno Major.

So I added There’s Little Left to my Good Music Makes Good People playlist and pressed play on Wouldn’t Mean A Thing, which was one month older. And that’s when it all happened: the urge to find out more about him. I could tell you that he’s British, that he’s a pretty good guitar player, that he has a famous brother (Dominic ‘Dot’ Major from London Grammar), that he’s credited as a songwriter on one of my favorite songs of the summer (SG Lewis‘ Yours). But before going into the details of his career, I thought it would be nice to just let the music speak. For starters, you could listen to The First Thing You See, his latest track which has just been released today and actually is one of the first songs he ever wrote — “one of those ones I could see through to the end from the start”, he adds on Facebook.

And then you could just learn which songs and artists have influenced Bruno Major in his life, on a daily basis and on a larger scale, thanks to the very first part of our interview (make sure to check out the YouTube playlist at the end of this post  + don’t just listen to Joey Dosik‘s Game Winner: the whole EP is a gem)! Stay tuned for Part 2…

The last concert you attended?
It was Lianne La Havas‘ set at Paradiso in Amsterdam and it was wonderful!

Three songs on repeat in your current playlist?
Can I take a look at my Spotify? (Yes, go ahead!) I’ve got Think Twice by J Dilla, Like Someone In Love by Chet Baker and Game Winner by Joey Dosik.

The best song to seduce?
Jesus… Well, that’s an interesting question but that’s a personal decision so… I prefer silence.

The best song to dance to?
I’m not much of a dancer actually. I’m gonna be honest with you! (Then is there maybe a song you like to get a bit crazy?) Mmmh… I’m gonna go with Let’s Dance by David Bowie.

The best song to wake up to?
Anything by Chet Baker!

The song that lifts your mood up?
Stevie Wonder with Songs In The Key Of Life — all of it!

The song that made you feel like singing for the first time?
Pink Moon by Nick Drake.

The song you wish you had written yourself?
Still Crazy After All These Years by Paul Simon.

The song that reminds you of your childhood?
Señorita by Justin Timberlake.

The song that represents you or your sound the best?
I have a song called Home which I love very much so I would choose that. It’s on my Live EP.