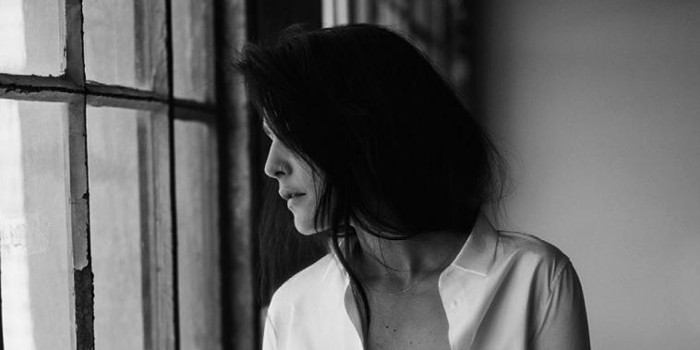 In November 2012, I was just discovering Jessie Ware but was convinced enough to rush to her first Belgian gig at the AB Club, a small venue, along with a friend that I had managed to persuade quite easily. And I ended up being subjugated to the point of innocently playing her first album Devotion in my Dad’s car later on, hoping he would be infected too. Two years later, once the Tough Love Tour‘s Belgian stop was announced, I quickly bought tickets for both my friend but also my Dad just to receive shortly after a text message from him notifying me that he was about to do the same! This is part of the Jessie Ware effect.

The three disciples that we are were therefore at the Ancienne Belgique (Brussels) on Thursday February 12, ready to attend her new show. It wasn’t the first time that the pretty thirty-year-old was performing in the biggest room: she had previously sold out a few months after her very first visit.

After a rough night (stop it, naughty minds, it’s not what you’re thinking), my day had apparently been as difficult as Jessie’s — at the end of the evening, she revealed how she had been ‘in a terrible bad mood all day’ until she climbed that stage and got a reminder that her job really was ‘the best job in the world’. As for me, once the bass excess of the sound system vanished, I quickly joined her on her little cloud as well.

I got scared for a minute, though. After a graceful entrance with Running immediately followed by Champagne Kisses (that Jessie gladly blew to the audience) and Cruel (my favorite song <3), I almost thought that her performance had lost the friendliness of her intimate concert back in 2012. But her warmful nature instantly shined through when she started to recognize some loyal troopers in the crowd.

Juggling between tracks from her first album and the gems from Tough Love  — released in October, the talented British lady unsurprisingly carried on with her title single which she sang an octave lower for the occasion (remember how she explained during her interview how the producer Benny Blanco urged her to explore the ‘dolphin territory’). Then when the last notes of the captivating Keep On Lying resonated, the celestial goddess couldn’t help but congratulate her guitarist  Joe Newman who had apparently never played his solo part so well (and even if I wasn’t there on the previous dates of the tour, I’m sure she was speaking the truth cause I was totally bewitched myself).

Jessie Ware kept on whispering sweet nothings with You & I (Forever) and Sweet Talk much to the delight of my ears and eyes, still completely admiring her. No picture (with the exception of a quite useless post on Instagram) nor video souvenirs for me: I think nobody would be crazy enough to experience heaven through a screen. And as per usual, the beauty style was the pure reflection of her music: sober but classy, her bubbly personality being in charge of splashing some colours on her monochrome set. So her typical-self would for example interrupt everything right before Kind Of… Sometimes… Maybe to tell the audience, with her lovely sense of humour, how she wrongly got pissed and confused by a fan’s phone case:

Now you know I could talk hours about how perfect and effortless she was (‘not a single note out of tune!’, my Dad gushed like the pitching accuracy freak that he is). But it’s her spontaneity which makes the difference every single time : besides her angelic voice, Jessie Ware bedazzles when she stops the clock by creating these little moments, remembering how she was recently outraged when someone asked if she was pregnant during a performance  — a fun fact charmingly punctuated with a few ‘bloody’ here and there.

But I should mention anyway the excellent twist added to No To Love, which became a mash-up with Marvin Gaye‘s I Want You. And while it didn’t take me long to grow bored of Say You Love Me (go ahead, boo me!), this Thursday night, it took on a new dimension as the final song of the show, thanks to a playful audience echoing her lyrics. ‘I love you’/ ‘Jessie’, they screamed after she would serenade us with ‘Say you love me’ / ‘When you say my name’.

True to herself, Jessie Ware closed her Eden’s doors without any encore, as always (she warned us though). And I left the venue on cloud nine, thinking that her paradise would only need a few backup singers and the Night Light single (mysteriously missing on the setlist) to reach even more higher skies.

This February 13, it’s been four years exactly since Jessica unveiled her Valentine music video in duet with Sampha, and three years since she released the Running visuals (her first single). And after last night, I can tell you with confidence that this star is not done shining in the firmament.