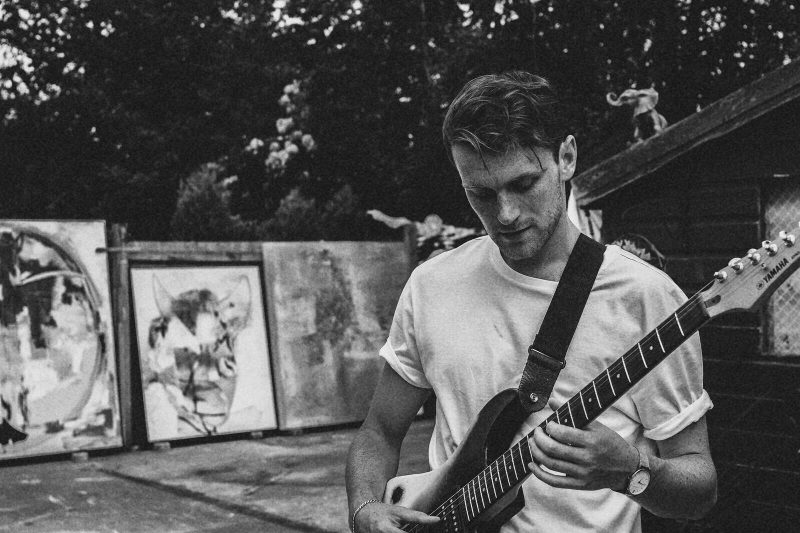 The first time I’ve heard of Kane Chattey was through his videos for SBTV and he has never ceased to inspire me ever since, my interest growing more and more with every interview, background story and project. While in the process of renewing the design and editorial line of my blog, I learned that he was about to release his debut single Writhing, which probably didn’t come as a surprise to anyone who’s following him as he’s been hinting towards a new kind of love for music for the past months on social media. What’s more intriguing though, is how he quit his dream job two years ago to become an artist, with zero musical knowledge or experience and I knew right away that this, right there, was an inspiring tale that people needed to hear. Including myself.

The night I sent my questions over to Kane, I’ve had the weirdest dream ever: I saw someone manipulating a caterpillar and I got scared of it. I’ve been told afterwards to pick up some kind of eggs from trees and to throw them so that they would become caterpillars. It made me uncomfortable but I felt liberated when I woke up, reading Kane’s answers and trying to instill some meaning in my oneirism. I thought about the relaunch of Urban Soul, but also the other phases I was currently going through in my life and all of a sudden, it all made sense. It was about taking risks, making changes, going for what you want, throwing away what you think is your ‘safety net’ and the ‘key to your happiness’. I couldn’t be more excited to share this interview with you, and I truly hope, although I’m pretty convinced of it, that you will find in it the light-bulb moment you were waiting for to embark on a quest for your ‘inner God/-dess’.

So… you want to be a singer?
Apart from a BETTER singer, there isn’t anything that I want to be that I am not already. We are all singers, we are all dancers, we are all authors, we are all artists. I love to sing and I want to do it at any opportunity. My only desires are to DO, not to BE or become. Whether I’m any good at it is a completely separate conversation, but all I want to be is all that I already am, and that just happens to be someone who loves to sing (and doesn’t ask for permission!).

You quit your job because you wanted to see if you could get happier. Can you say now that you’ve found happiness?
It’s interesting because every time I feel like I can get my hands on this ‘thing’ called happiness, it slips through my fingers. I personally don’t believe ‘happiness’ exists because it implies a state of being where nothing is negative and that’s nearly impossible as Life, by definition, is a constant back and forth between light and dark energies. I almost feel like it’s something that was invented in an office or church somewhere; ‘Hey guys, if you do this/buy this, this will bring you this state called HAPPINESS’. Besides, there’s too much exploitation in the world to be happy. I do however believe in calmness. That’s something that I’ve managed to find. A calmness that no matter how bright the light gets or how deep the dark goes, I’ll be able to remain balanced somewhere in the middle.

I’m very curious to know more about the process you went through in order to find and discover yourself as an artist. I’m assuming you couldn’t play any instruments and that you had never sung nor written a song before, which reminds me of Ginger Baker’s story, who quit his job claiming he wanted to become a drummer without having touched any drums prior to his decision and then became a drummer for Cream alongside Eric Clapton.
Yeah, I read that story a couple of days after I quit my job to do the same thing actually. It was a huge sign of confirmation for me. I’d just done an extremely intense job and it was the last straw for me at my job, I decided I had to do something else. I had a quiet moment with myself and realised that at the heart of every ‘career’ decision was music. It was kind of like realising that I was actually in love with a girl I’d been friends with my whole life. I couldn’t play an instrument or write a song, which meant that I couldn’t truly have a conversation with the love of my life and I physically felt that distance. So, I got a keyboard. Then a guitar. Then a bass guitar. Then I started collecting everything I could find that made noise and started to figure out how it all pieced together. I studied my favourite artists, poets, musicians. I emulated. I innovated. I took some singing lessons but I’m not too sure they made me any better. I just practised and things started to happen. Then I moved to LA, I fell in love, I got my heart broken and that opened me up to a whole side of life that I’d never even seen before and that apparently was the moment I had been practising all year for. I finally had something to write about.

Once you started this quest, has music always been the plan? If I’m not mistaken, I think you also spent some time with JMSN who’s doing great as an independent artist. Did observing him somehow encourage you to give this a try?
I’m going to take the context of ‘quest’ to mean the moment I came into life with my little sword and shield! I don’t know, if I’m honest. It would be romantic to say that I’m born to make music but I think the purpose extends much further than just the music itself. I think the main purpose is to somehow bring people closer to the God inside of themselves, which is the infinite source of potential which all life springs from. Working with and observing JMSN was definitely something that changed my life. For months I slept on his sofa, waking up at the crack of dawn and getting to work, helping him facilitate his dream whilst simultaneously learning that the only thing it takes to be the best version of yourself is hard work. Not to discredit JMSN’s talent, because he’s truly god-given, but he also works harder and braver than anyone I’ve ever met & I’m ultimately grateful for everything I learned from him.

Through your series of podcast SYWBAA, you discussed with a lot of various artists. What are the best lessons or pieces of advice you learned and from whom?
This is always a difficult question to answer because the conversations are so long and dense with incredibly honest talks that it’s hard to even remember specifics. One thing that always stuck with me though was when Jesse Boykins said ‘You can measure Love by the amount you’re willing to compromise just to keep that thing in your life’ and I was like ‘Damn, that’s so true”. Sometimes love comes with all of these expectations (e.g., I love art but I hate society, I’ll never work a job to fund my art. I love this woman but the relationship isn’t all roses, there are arguments, I need to maintain a constant level of presentness that I wasn’t prepared for). If you truly love, you’ll make whatever sacrifice you need to make in order to keep that love alive.

You dropped out of university, got into SBTV (as a Creative Director) sending monthly emails to Jamal, quit your dream job: you’ve never shied away from taking risks. What’s going through your mind before such important decisions?
Usually something along the lines of ‘WTF are you doing!? Everything is fine, why do you have to break it all apart and rebuild it all over again!?!” but I can when energy becomes stagnant. I am on a constant journey towards the truth and any moment that I feel like I’m losing my way, I have to get myself back on course. Often that means letting go of everything I’ve acquired in that period of time but the main mantra is always ‘get yourself home’ and that is back to the ocean of potentiality that all life springs from.

Listening to your song and taking into account the fact that you released it on your birthday made me feel like this was kind of a rebirth for you. Do you perceive it that way?
Absolutely. My mum asked me ‘What do you want for your birthday?’ and the only thing I wanted in that moment was the courage to be myself. I realised that’s not something anyone else can give me. I have to give that to myself. I usually hate birthdays, because of a kind of traumatic life. I’ve always felt a bit burdened by life, kind of like ‘Ah, another year of this shit?’, so I decided that I needed to change that and finally give myself a gift. The gift of courage, permission, acceptance and ultimately Life. So yeah, absolutely, it’s a rebirth. 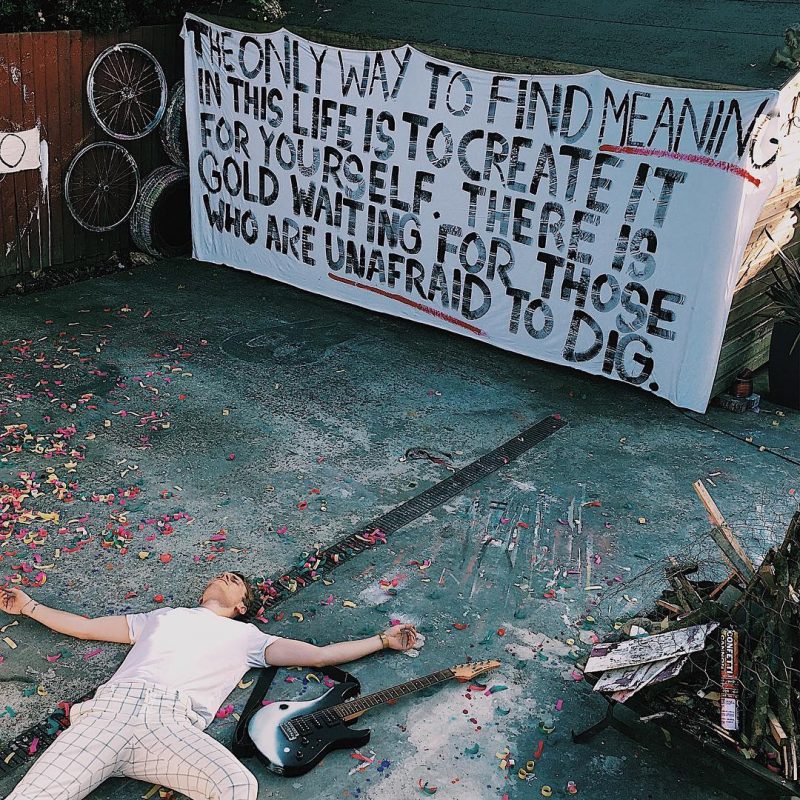 What’s next? Do you intend to make a career out of music or will you keep on experimenting with different forms of art?
Now it’s just time to stand in this spot that I’ve found myself in and dig and dig and dig and dig until I reach the core. I feel like I’ve been walking around with a metal detector and I put an instrument in my hand and a mic in front of me and the detector beeps like crazy, indicating that this is where I should dig. I’m always experimenting with different mediums of Art, but the focus is very much exploring music and seeing all the ways I can affect myself, and in turn the world around me. If I get paid for that, awesome!

I read in an interview that you have a ‘hard time celebrating’ and rather tend to think of what you could do tomorrow to make it better than today. Did you finally let go with Writhing?
Yeah, I used to be super critical and hard on myself for things not being perfect but if there’s one thing that I’ve learned on the process its that perfection is a bit of a myth. The more you work on something, the more you’re hiding the pure essence of the moment that you captured. Perfection, if I was to define it as ‘As it should be’, can’t really exist because there is no ‘should’, there is no process of judgement. In life there is only ‘What is’. There is only what is in front of you right now. And it’s all perfect…even the madness! But Writhing really ended up as a celebration for me. Celebrating the fact that I’m finally able to let go of this imaginary ‘should’ and finally being able to accept and embrace what ‘is’.