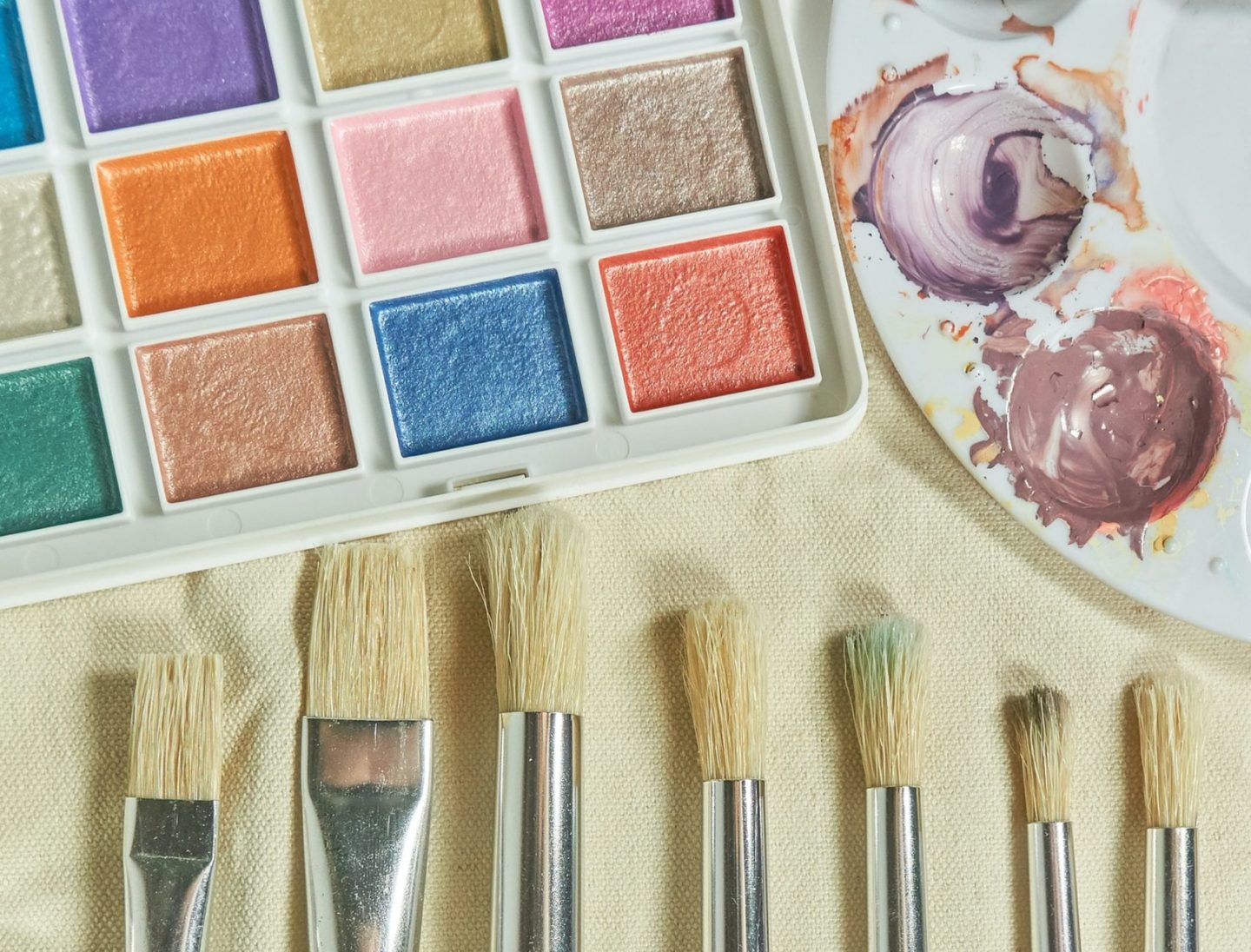 One of the last times my mom came to visit before covid19 hit the globe, she gave a long, deep stare at a picture of me as a 5-year-old, posing boldly, hand on the hip, in a field of poppies in the middle of the mountains. “Look at you… So young and yet so fearless. You weren’t scared of anything, nor anyone! No one could tell you what to do.” These words echoed in my mind for many days: while I’m still very independent in all areas of my life, I kept wondering why I was now the type of person to worry about what others might think of me. My confidence had indeed slowly disappeared over the years and it was starting to become an issue.

I gave it some thought and decided to find out ways to be happy and proud, but also to love myself without relying on the way someone is looking at or talking about me. I quickly noticed a common thread: I needed to reconnect with my inner child and this included revisiting my childhood (and teenage) passions.

Two decades ago, I used to put on shows for my parents (with paid entrance because I was already a boss lady). This was a very serious business for me: I was supervising everything from start to finish, from rehearsals, styling and writing scripts to choreographing, curating music and of course, performing, alongside my siblings. You would find me creating perfumes and “jewelry” out of the flowers in my garden. Designing clothes. Writing songs, stories, poems. Devouring books, making magazines, recording radio shows, cross stitching. Singing, dancing, acting. Some would even say that I was great at it. And these compliments would never fail to put a smile on my face and faith in my heart because I loved it all… and yet I stopped it all. Out of fear and then out of time, even though I often use the latter to hide the main reason.

I left all of it behind me for the past 10 years, at least. But I suppose the good thing about this quarantine is that I had no more excuses. Nowhere to go in the weekend, no one to see. So here’s what I’ve been busy with since the end of March!

Last week, I stumbled upon an email from 2010 where I was telling a friend how much I love reading and went through 6 books in 2 weeks. Now I’m happy if I even finish a couple in a year! I had slowly started to pick up that habit last year as I was commuting for 2 hours every day but catching up with my Netflix series or Instagram seemed more appealing 90% of the time. I’m happy to announce though, that I finally closed for good my Murakami’s Norwegian Wood, opened for the first time in India, back in January 2019. I loved his way of making the mundane sound so poetic and I definitely plan on exploring more of his work. I also finished a book about meditation by Jon Kabat-Zinn of which you’ll find one of my favorite quotes below. And I’m currently reading Mixed Feelings, a collection of poems and stories by Avan Jogia about growing up mixed race, but also almost reaching the end of The 4-Hour Workweek by Tim Ferris which honestly seems un-doable but do give you some interesting ideas to work smarter. Next up will probably be some fiction as I feel this is what nourishes and inspires my writing the most, and The Power of Now by Eckhart Tolle because this girl needs to stop living in the future. 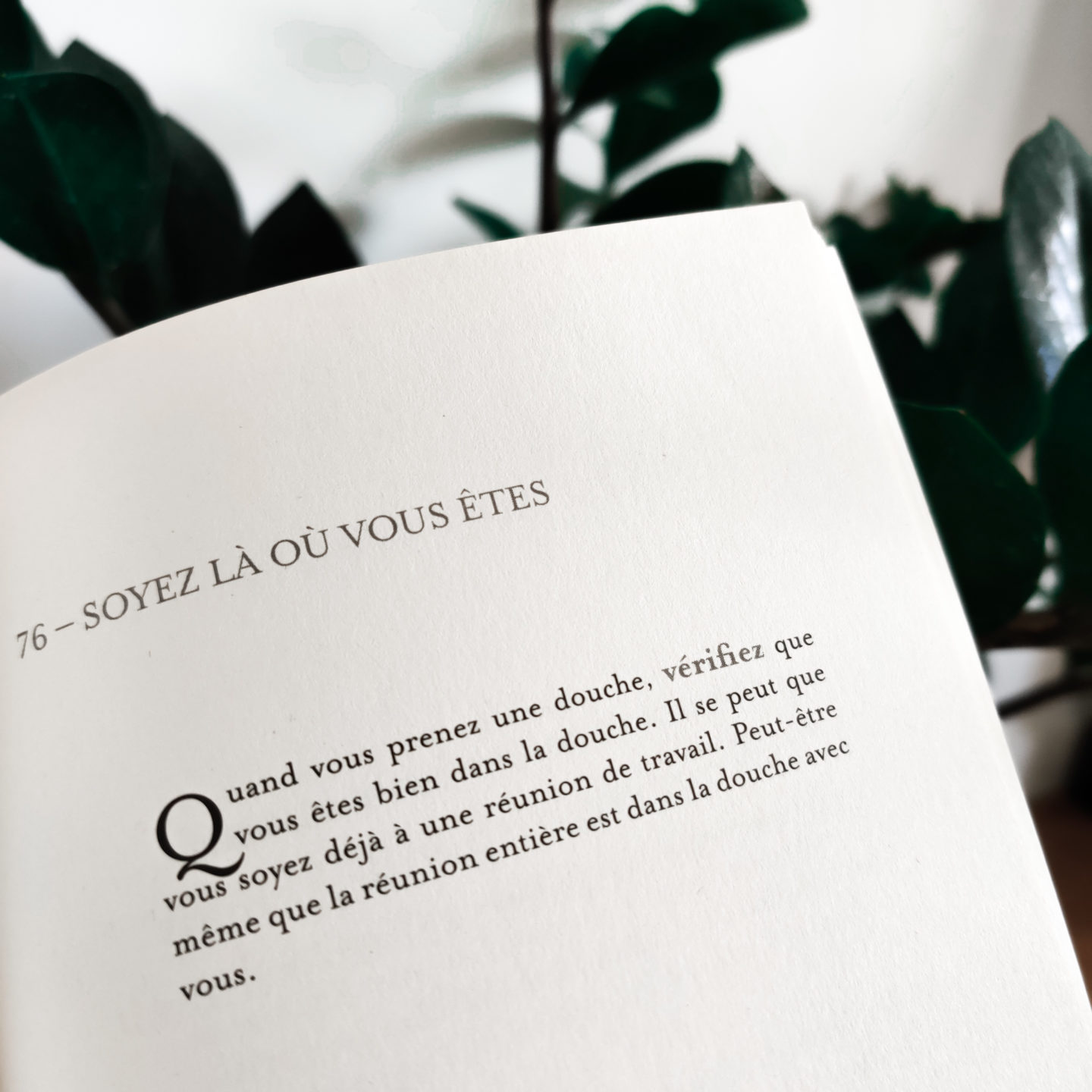 “Be where you are. When you’re taking a shower, make sure you’re really in that shower. You might already be in your work meeting. Maybe that whole meeting is in the shower with you.”

Talking about writing, I also enjoyed following Rupi Kaur’s workshops on Instagram. The free writing experience was daunting to say the least but a great exercise to let go of all expectations and mental boundaries. She did four so far, which you can all find back on her IGTV.

I’ve always been a fan of dancing, which I’ve been practicing since I’m 10 and even enrolled in an Academy for a few years, until the teacher started pointing out that I was not as thin as the other students and that I should probably lose some weight (I was 14, with thighs, hips and ass but I guess it wasn’t in fashion back then). That year I decided to give my 200% so that she would have no other choice but to put me front row, “fat” or not. And I did it. And then I quit, claiming to my mom that I just didn’t like dancing as much as before. To this day, I’ve actually never told her the truth. Years went by and I eventually got back to dancing, with extra belly rolls but not caring so much thanks to teachers who valued my skills more than my weight. Then work took over. I had been eyeing a few dance schools in my city for the past couple of years though but was terrified at the thought of being the fattest one. I took one Bollywood class and kind of gave up.

But since getting back to the freelance life earlier this year, I knew I would have to make it a point to move my body as I was getting rid of the daily 40-min walking parts of my commute. And I’m so proud to say that I’ve been keeping at it since January, first following the Blogilates fitness program (daily workouts for 28 days), then trying out some yoga with Adriene in February (but sadly gave up as I kept injuring my back and then my knees). I have now found what works best for me: curating my own little workout 30-min playlist on YouTube, mixing fitness and dance. I’ve been religiously doing so three times a week throughout the lockdown and switch up the videos every month to keep it exciting. My go-to channels are The Fitness Marshall – his sassy comments and encouragements put me in the best mood and I really appreciate that he brings people of different body types in his videos – and LiveLoveParty. As a former zumba lover, I often add a few of their routines which boost my energy levels.

And because I’ve been so regular with my workouts, I am now looking into treating myself with some proper sportswear outfits and maybe some fresh sneakers! The website Sportshowroom has recently launched in Belgium and compiles many big brands and webshops, making it the online place to be to easily hunt for your next pair. I’ve personally got my eye on the Nike Air Max 270 React SE, especially in pastel tones for a summer vibe. These would not only make my workouts more comfortable but also my daily looks more stylish for sure! The adidas NMD also offers the best of both worlds, coming in a various range of funky colors and promising endless energy while the adidas Ultra Boost sneakers might as well just be what my feet need (being on the bigger and wider side) with their lightweight and stretchy upper for optimal movement. 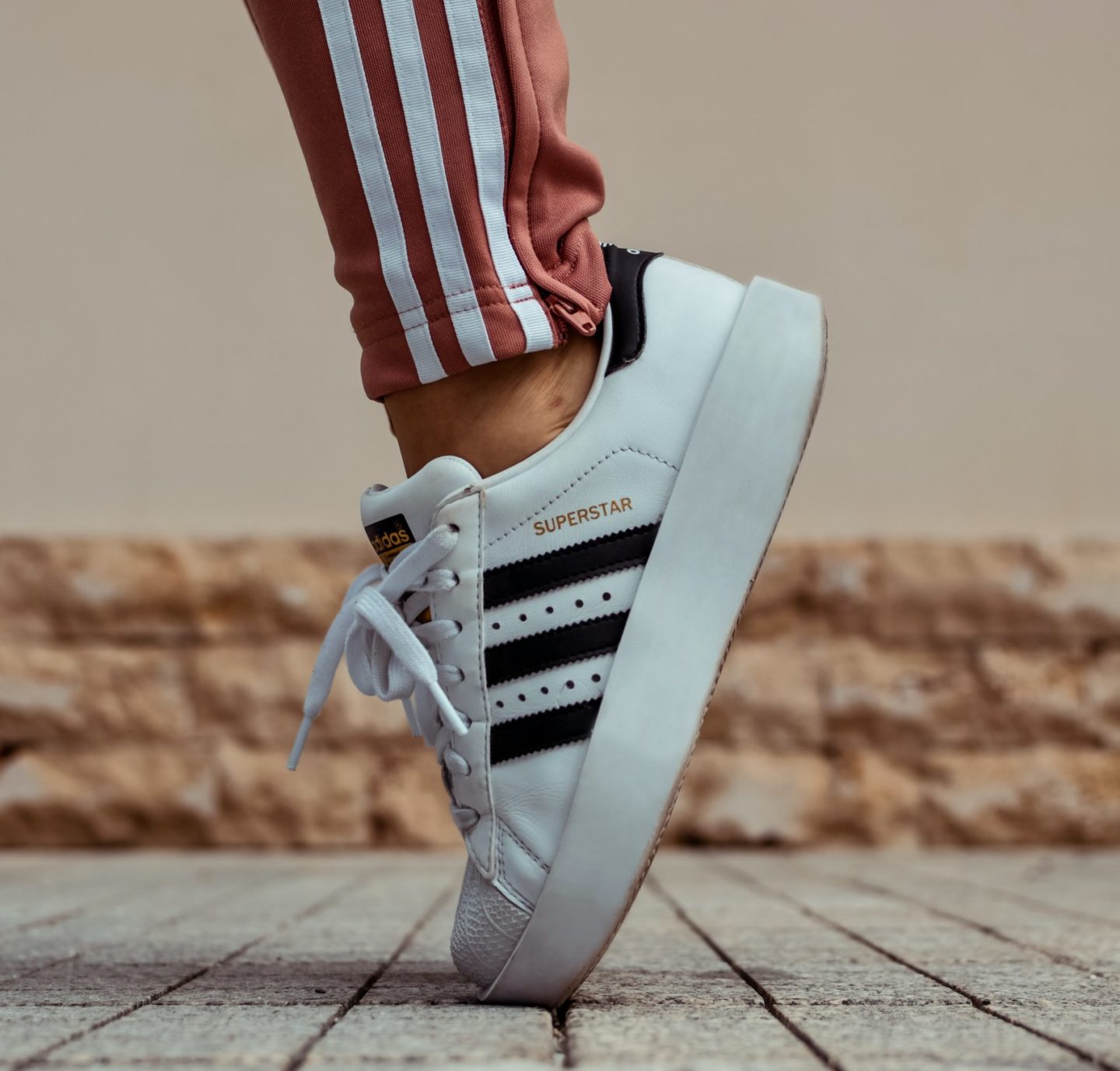 Listen, nothing fills me more with joy than singing my favorite songs at the top of my lungs but I must admit that I’ve just been scared of doing so since I’ve been living in an apartment, out of respect for my neighbours. But I’ve endured them listening to Billie Eilish’s Bad Guy on repeat for several days (great song by the way but when I say “on repeat”, I really mean it – I was dying to ask them if they were rehearsing some kind of dance routine to justify listening to it so much). So they will survive if I sing along to some zouk or hits from my teenage years one hour or so every week, right?

Now, something new: I’ve never been much of a drawer but I kind of liked doing things with my hands as a kid. After an attempt at making my own candle (with my old wax and thread that were 18 years old – not the best idea), my boyfriend and I ventured into watercolor painting. I had zero expectation and was solely curious to try because it looked like a relaxing activity and, HELL YES IT IS. Opening the windows to let the sunshine in, with my Summer Breeze playlist in the background while munching on a fruit salad in between colours feels more therapeutic than I would have imagined. I’m not the next Magritte but I’ll keep at it because I love this process and find it’s an amazingly efficient way to completely switch off my overthinking brain. 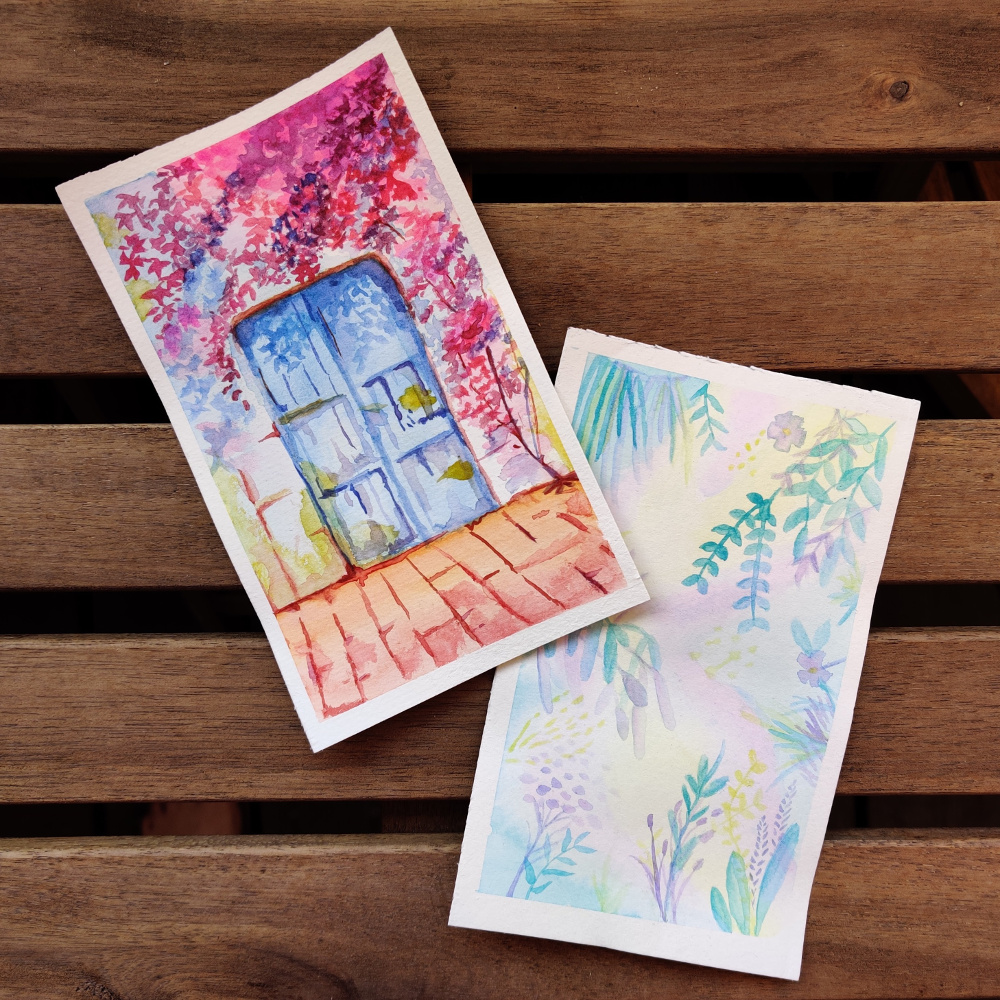 There’s something truly magical about reconnecting with your inner child’s intuition and creativity. My weekends have honestly never felt as relaxing and I’m overall just more at peace, happier and confident. I still have a long way to go but I challenge you to give this a try and see what a difference it can make for your mental health and wellbeing. Let me know in the comments if you recently revisited any of your forgotten hobbies!