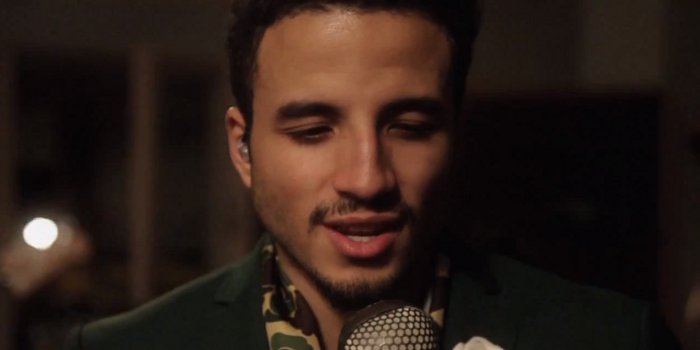 OK guys, you’re in for a treat! He was the first one to suggest it and yes, I can tell you now that Urban Soul will go ‘international’ some time during the year. But as I would do anything for Kim Cesarion (well, I’m lying but it’s my website after all so let me be a bit overdramatic if I want to), for the first time ever in Urban Soul‘s history, I’m translating one of my posts in English. Yessir, that’s how strong my love is for his first single.

So yeah, his name is Kim Cesarion but it can also be whatever you call him or at least that’s what he pretends in his very first single Undressed. If his name sounds familiar, congratulations, you’re da real deal: either you’re following this blog religiously (although you probably don’t get a single thing of what I say, according to the fact that I write exclusively in French), either your tastes are as good as mine. Indeed, in June 2011, I was introducing his Nikka Costa‘s cover, Like A Feather. Back then, this young Swedish/Greek/Guadeloupian was 20 years old and had many dreams in mind.

“At the moment, I’m pretty much locked up in the studio, getting all the bits and pieces ready, so that I can one day release my own material. Hopefully very soon…”, he told me back then. Two years later, this graduate from the prestigious music school Rytmus Musikergymnasiet still spends his days recording with the Aristotracks team, as he has now signed with Sony Music Sweden and RCA UK and also convinced the record label Columbia along the way, which will support his career in the United States!

He should drop his debut album by the end of the year, a record born from his encounters with the talented songwriters and producers Lukipop and Gary Clark but also Arnthor Birgisson who previously worked with the likes of Jennifer Lopez, Janet Jackson, Enrique Iglesias, Leona Lewis and Shontelle. Recently, he even broke the record of the UK’s fastest-selling single thanks to James Arthur‘s cover of Impossible (James is the winner of X Factor UK 2012).

In October, Kim introduced his first songs during a showcase in Stockholm. His falsetto, vocals and stage presence wowed the crowd and his funky and soulful world should please those of you who count Prince, D’Angelo or even Maxwell among their favorite artists. While electronic productions are conquering the charts, this charismatic young man has chosen, from all of his 22 years old, to get us back to basics with some real good music, surrounding himself with amazing musicians. Risky choice? I don’t think so. But this artistic decision definitely shows his inspirations as you’ll get the chance to realize later this week…

Undressed will be released on iTunes and Spotify on March 22.