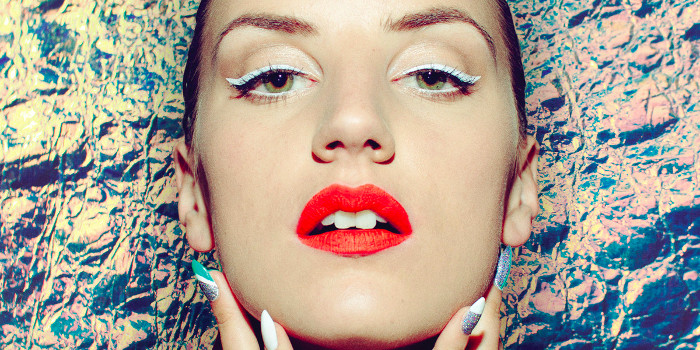 My musical cravings can change radically from one season to another and, after lots of winter’s soul and R&B ballads with tearful and even depressing lyrics, as the sunny weather is coming back I only feel like listening to some colourful poppy songs. So when Marlene wished me a Bon Voyage (nice trip!) with bamboos in the background and promising me the ocean, I immediately knew I had found the sountrack of my summer.

But don’t get fooled by these notes full of sun: Marlene is another star coming all the way from Sweden. And even though this first single would be classified as pop, she’s been feeding her little ears with R&B music for a long time, while always making sure to watch closely her idol and compatriot Robyn. “I’ve listened to American R&B for a long time. For years I felt I didn’t match the Swedish music scene at all. For just two years back barely no one ever talked about R&B in Stockholm, she told Ja Ja Ja.(…) I remember I was a bit worried no one would understand me and my music in my own country. Now that my music is out they actually seem to appreciate it a lot! Maybe mostly ’cause there’s been a huge wave of R&B/hip hop music flowing over Sweden lately so now they can relate more easily to my music than they would have done before, I don’t know…”

Marlene first got signed as a songwriter to EMI Music Publishing, now known as SONY/ATV, and started sharing her talent with other artists, including the dubstep musician Benga. She stepped out of her comfort zone writing and singing his tune Pour Your Love, but also following the British man for a whole tour. But when she met the French producer Tepr, she finally decided to take care of her own personal career. “I knew all along that I wanted to make my own music, but it took me some time to find the right people to work with. Since I don’t produce myself I needed someone who understood my vision and wanted to develop it. Meeting someone you can relate to artistically is as hard as finding a boyfriend. Now I finally feel that I’ve found one, with my producer in Paris”, she revealed to Radar Magazine.

Inspired by Tepr and Myd (another Frenchie)’s productions, Marlene locked herself out in her little studio with one of her best friends who also appears to be a singer: Ji Nilsson. Together, they penned some songs which are now part of the Indian Summer EP. And even if it’s clearly too soon to speak about any indian summer, please note that the title is only half a lie as the EP does a great job at sending over some warm and sunny vibes even if it’s not the season… yet. As soon as I heard the first track (which gave its name to the project), I started dreaming of a getaway, long evenings with friends spent enjoying the generous sunbeams, carefree jumps from the top of a cascade and other bits and bobs everyone likes to associate with holidays.

I have to admit I have the biggest crush on I Do This For You, lyrical gem with this bittersweet feeling reminiscent of the rain pouring down on the freshly cut grass when it’s hot outside (you know this delicious smell, don’t you?). The track is followed by the gorgeous ballad Stay Awake, which sounds like a sweet kiss over a sunset. But it’s Lavender Fields that really wraps up this first EP in a nice and fresh breeze. And just like when summer comes to an end, we find ourselves praying this moment could last forever: we’re yearning for an Indian Summer…

As it turns out, you’ll be able to enjoy this EP over and over again if you’re looking to quench your thirst for more Marlene. Although she has now signed with Sony Music Sweden, the 27-year-old singer is not ready yet to deliver a full LP. “I haven’t written a whole album yet, so I don’t really know what to expect myself. But if I’m guessing it’ll be lots of Swedish melancholic R&B and pop, beautiful and dreamy sounds and lyrics about my life”, she smiled to Ja Ja Ja. In the meantime, I can only and strongly recommend to keep an eye on her because, believe me, Marlene got all the potential and versatility of a Scandinavian Rihanna.

THE INDIAN SUMMER EP ON ITUNES