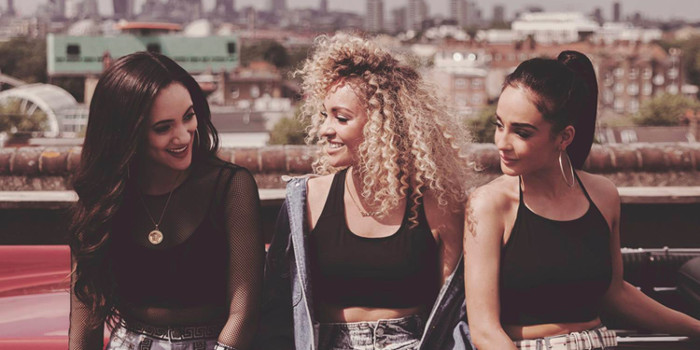 When a girl band fails to succeed in the charts or ends up disbanding, many singers choose to roll solo. Well, Nadine Samuels, Annie Ashcroft and Frankee Rose have decided on the other hand to join forces in order to find a new “Modus Operandi” and found the band M.O (see what I did there?). A few years ago, the first two were part of Duchess (but their first album recorded with RedOne and James Fauntleroy, among others, never saw the light of day), while Frankee was one half of the duet Mini Viva.

In 2011, when Frankee was just thinking to exploit her talent on her own, Annie and Nadine offered to joint hem. ” We were getting loads of material together in the studio and Frankee was there working on solo stuff. We’d met Frankee a couple times before and thought about trying some stuff out together and had a few studio sessions and that was it”, remembers Annie in the band’s biography. And so started M.O, the charming trio made in UK.

Thanks to their take on The Boy Is Mine (Brandy & Monica) – renamed The Boy Is Tied and featuring the rapper Lady Leshurr – for the famous A64 segment of SBTV in October 2012, the girls managed to get a lot of attention on internet (and yes, this is Mafro indeed in the video, aka Ella Eyre’s guitarist).

But those three young ladies were keen to deliver more than just covers. “We write the songs, we help with the choreography, the styling, we have a hand in everything.”, they insist. One month later, their first single was there, Wait Your Turn, quickly followed by a new performance for SBTV in which they sang Destiny’s Child’s So Good.

Every new song was bringing up another one: Ain’t Got Time, Come Let Me Show You (specially made for the clubs) but also HOT, whose music video has been directed by Phil Griffin, although he previously stopped his activity to create bespoke online content for the likes of Rihanna and Jay Z. Totally seduced by the three English women, he glady accepted to film this visual nonetheless!

As far as I’m concerned, it’s the ‘90s vibe of their single On Ya that made me feel like joining the worship. Sad twist of fate : this very same track is also the one which seemed to earn lesser success according to the YouTube stats, lower than the view count on their other videos…

But I’m rejoicing now that I realize that it didn’t discourage them to keep on following this musical path with For a Minute and Dance On My Own, their latest music video. Drawing on their garage influences, this tune samples Sweet Female Attitude’s Flowers and makes me particularly nostalgic of the Mis-Teeq’s era, which should reassure Alesha Dixon who claimed last year in Metro that nobody tried to pick up their niche.

After supporting Little Mix in the UK, M.O is getting prepared for their first album with Rondor/Universal, which should include a track co-written with Esmée Denters (Runaway), but also some collaborations with James Fauntleroy and Future. And while the release date is still to be announced, I’ll definitely be there to grab my digital copy of Dance On My Own on iTunes on August 24!