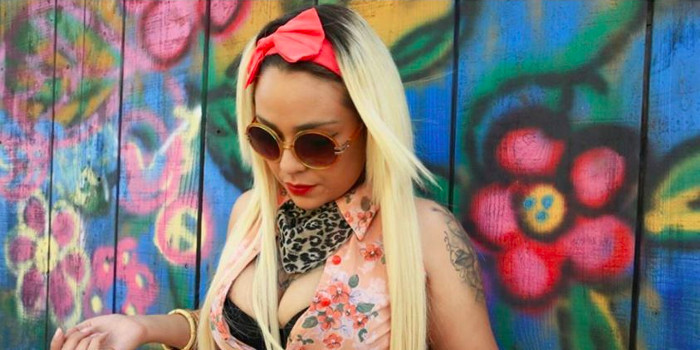 As I’ve decided to skip travelling this summer in order to better run away from the snow in a few months, I’ve made the most of the rainy days of August to catch up with my movie list (which has significantly been cut down to 84 films to watch), with my series… and to find myself a new reality tv show because it would have been such a shame to deprive myself of my favorite guilty pleasure. I had my heart set on Make or Break: The Linda Perry Project broadcasted on the American channel VH1 after I learned that the VanJess sisters were part of it. And it hurts a little bit to say it but I gotta admit that their show got quickly stolen by a young lady with a name that already screams fame and talent (and her first name is literally one of my favorites ever): Anjuli Stars. “Singer, rapper, songwriter, musician, poet” : that’s how this Miami artist born from a Cuban father describes herself on her Facebook page and believe me, she’s absolutely not overselling. Introduced as a rapper in the beginning of the show, I’ve been impressed by her freestyle skills but that was before I got to see her in front of a piano, and later on playing the guitar. Then I heard her singing and I was done: we had a winner.

Thanks to her percussionist/singer dad, Anjuli got into music at 5, learned to play the piano at 11, wrote her first songs at 13, started rapping at 17 which is also the year she won Showtime at The Apollo (where her idol Lauryn Hill, Luther Vandross and NeYo also performed previously) three times. In 2003, she earned a scholarship to study music business and songwriting at the prestigious Berklee College of Music and two years later, she got offered international exposure for the first time being featured on a Pitbull‘s album (305, dale!). “I made a rap mixtape that had this one song, Raindrops, an acoustic ballad. It had gotten into the hands of one of Pit’s homegirls, and he was like, ‘Wow, this girl’s incredible’. He took the track, remixed it with the Diaz Brothers, and it came out on the album like a year later. I wasn’t pushing for it. The opportunity just kind of fell in my lap”, she told Miami NewTimes.

Good news never come alone and Anjuli Stars also got to be a background singer for the likes of Marc Anthony, Paulina Rubio and Laura Pausini, to open for Lil Kim, Young Jeezy et Lil Wayne in Miami during the 2005 MTV VMA and to perform at the Jazz Q Festival in St. Petersburg, in Russia, in 2006. Once she graduated, she became a bartender and server and decided in 2011 to seriously pursue a musical career. “I got offered four different independent record deals. But I decided to retain all creative control, stay completely independent, and launch my own South Dade Records label”, she explained. She released the mixtapes Starvation Volume I & II, still available for download on her Bandcamp page. In 2013, she also collaborated with her friends from the hip hop group ¡Mayday! on the Mortuary Mary track.

And that’s when her fairy godmother Linda Perry showed up. That’s what you need to know if you’re not familiar with her: she’s the former singer of 4 Non Blondes and the hitmaker behind Pink‘s Get The Party Started, Christina Aguilera‘s Beautiful and Hurt, Gwen Stefani‘s What You Waiting For? and Alicia Keys‘ Superwoman. This summer, she launched her own reality tv show, hoping to find an authentic artist to whom she would offer a record deal with Custard Records, where she has already signed James Blunt. And thanks to the magnificent Fish in the Water (stuck on replay!), Anjuli managed to get her attention.

“Well, actually, Linda found me on Twitter, revealed Anjuli during a new interview with Miami NewTimes this summer. It’s a crazy story, but she had tweeted out that she wanted to hear independent artists and I sent her my song Fish in the Water where I’m playing piano and singing, and she tweeted me back like, “I like your voice’. She’s been a favorite of mine for her work with Pink and Christina Aguilera and Gwen Stefani, so I was amazed that she said that, but I didn’t think anything was going to happen. Two weeks later, VH1 contacts me and they’re casting for a new show where the only requirements are that you play a musical instrument and write your own songs. “ So it was strictly forbidden to work on old material: every day, the acts had to write brand new songs and then worked on it with Linda Perry and her insanely talented musicians in the studio, often asking the artists to improvise in order to get them to show real and raw emotions. And God knows we got plenty of emotions with Anjuli! I cried when she won but also after her outstanding performance Open The Door, that she presented with a gospel choir. Unfortunately, I feel like the show’s EP version, which featured Linda Perry’s background vocals instead of the gospel ones, is a bit less powerful in my opinion (although it makes it more intimate).

Anjuli Stars is not the only one who got signed to Custard Records: Candice Martello (who was initially a member of the punk duet Omar that Linda split up to help Candice develop a folk sound) is the second winner of the contest and both girls would like to work together on a song at some point.

Since The Linda Perry Project came to and end, Anjuli left Miami for Los Angeles where she’s co-writing her first album with Linda. “You can expect great music, emotion and honesty. For now, that’s my focus, she announced to VH1. I never would have thought people would know my name on television before knowing my music, but this is just part of my story. I’m excited to show people my artistry because I’ve worked to cultivate it for so many years. I’m a writer at heart and all I want to do is share my own personal experiences. I really embrace and want to be a positive role model for women and young girls. I want people to be inspired by the things I create.“