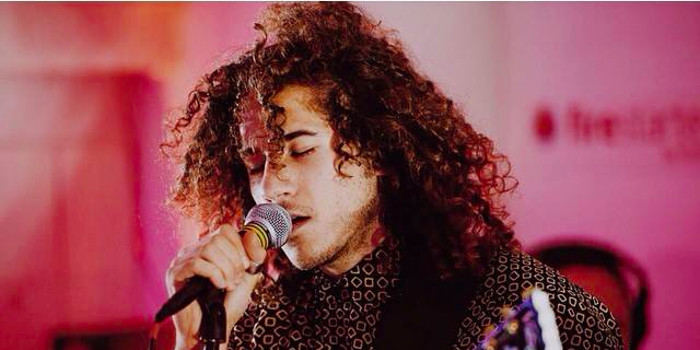 A few weeks ago, when I was just about to meet with Morpheus, I couldn’t resist not scrolling one last time through my Instagram feed… and a video of the singer Mar totally got me bewitched. I saved the link, then later searched, listened, watched and decided to share the results of my little investigation with you.

Based in Amsterdam, Mar started to play the drums when he was only 5 and grew up with a musician father crazy about Jimi Hendrix and rock music, a passion that he didn’t seem to inherit from until pretty recently. If he listens now to some Jeff Buckley (that he cites amongst his influences) and even some Nirvana, the singer-songwriter has always preferred soul music and the likes of Prince and Stevie Wonder. This is actually what allowed him to make friends with Full Crate, his longstanding music partner when they were still teenagers. « We went to this high school and not a lot of people were feeling like, soul music, hip-hop and what not. I think it was that Musiq Soulchild‘s video,  Just Friends, and I was walking in the hallway and he was beatboxing that intro. I was like “What? You know that?!” », told the producer during an interview with Live at the Loft. But back then, Mar was rapping more than he was singing. That was until Full Crate incited him to show off his voice a little more and, you’ll see it further in this post, he was damn right!

Over the years, the duet really worked their magic and got noticed by the label MPM who proposed them to release a song:  She Was Fly, out in 2009. The two friends ended up with a full EP, Conversations With Her, the following year.

Even though Mar and Full Crate are working closely together, they still give each other the freedom to evolve on their own. That’s how the same year people were able to find online the Variations project in which Mar reworked several songs from totally different registers. “I grew up with so many different music genres. With my dad as a professional musician and mom literally starting and ending days with the radio as her bible, I got exposed to music as a whole package. With this as the foundation of Mar Variations, I can take any joint or lyric and flip it the way I would love to hear it”, he explained. He put his own unique twist on Oddisee‘s Inglewood, Slum Village‘s 2U4U, WHAM!‘s Last Christmas, Louis Bordeaux‘s 1st Session, but also Lil Wayne‘s Single and Aphex Twin‘s Avril 14th (that he sings with Szjerdene) which are my two favorite renditions.

In 2012, he sustained his momentum with an original EP this time, called Seeing Her Naked. Between FS Green and Full Crate productions, Mar also joined in on the tracks My Absolute and Our Attempt, showing the full extent of his talent.

After these little solo adventures, Full Crate x Mar came back in January 2014 with Man x Woman, a sexy single… topped with house music. “Mar was the one who interest me to a lot of deep house and then from there as a DJ I grew to play more house and me and him just always love house music”, Full Crate remembered on Sub-Cult.com. A month later, Mar treated his fans with a new solo EP, Form – romantic, sensual and modern, as per usual.

In June, the Man x Woman music video was finally uploaded, marking a turning point for the duet who signed with Island Records. In October, never running out of imagination, Mar released a stripped down version of the song and that’s exactly how my new obsession was born.

Since then, there has been a second single, Nobody Else, another musical fusion with a very 90s vibe.

I know Amsterdam is not that far so here’s the point: with or without Full Crate, I kinda want this Dutch genius to perform in Belgium. So Mar, if you read this: let’s make a swap with some French lessons (cause the man said that if he could sing in my language, he would do it right away) and hair tips (#curlycrew). Do we have a deal?