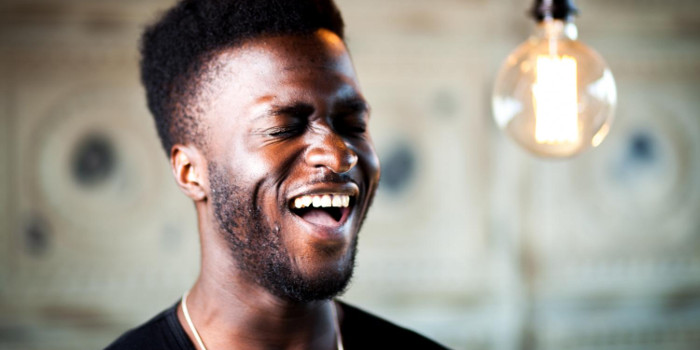 Remember how we were all supposed to get Kwabs‘ Love + War debut album in our hands this Monday 18th of May (and even in late June in Belgium!)? Well, it turns out we’ll now have to wait for September 11. But the British singer-songwriter wouldn’t just leave his fans with nothing to hold onto in the meantime. So he released a brand new single called Fight For Love, a few days ago.

In all honesty, I was secretly hoping for him to unveil the power ballad Cheating On Me (another gem produced by Felix Joseph), or the very Destiny’s Child-esque My Own, surprisingly produced by SOHN. But let’s not be an ungrateful bitch here. We might also appreciate the fact that he shared the actual tracklist to comfort us. Thank you, that’s very sweet of you indeed <3.

You know who else is sweet though? Me. Yeah, I’m totally and shamelessly strewing roses at my own feet. But that’s only because I’m super happy to have a consolation prize to offer you as well: last month, when Kwabs was in Brussels for his sold out gig at the Botanique, we hung out on the sunny terrace of the venue to talk about his upcoming album. I’m afraid I can’t say a word about this for the moment BUT I can already share with you guys our discussion about his favourite songs and artists. I’ve been running this quiz for a while now and it’s funny how some names and tracks come back in every interview — how D’Angelo is always linked to seduction, how Lauryn Hill gave rise to many vocations and how JMSN and the star of the day both answered the three same artists for the three very same questions. Alright, I’ll just stop blabbering now and let you learn more about the musical life of… Kwabs.

The last concert you attended?
Oh my goooosh… Oh, no, no, no, I know this one! It might have been… Raleigh Ritchie, at Heaven, in London. (Love him!) He’s great, isn’t he? He’s so… (Amazing!) Yeah, yeah, yeah! (I’m desperately waiting for him to come performing in Belgium !) Yes, he’s so good, man! I love him!

The last album you purchased?
It was Queen of the Clouds by Tove Lo… I think? Really great, I love it!

Three songs in your current playlist?
Mmh… Talk About It by Erik Hassle. Mmh… wooh! Superwoman, the Donny Hathaway version. The original is by Stevie Wonder, obviously. What else I’ve been listening to? Monument by Robyn & Röyksopp!

The best song to seduce?
How Does It Feel by D’Angelo. (Of course… It’s always that one that comes up!) (laughs)

The best song to dance?
Mmh… Oh my gosh… Thriller by Michael Jackson!

The best song to lift your mood up?
Oh wow… Green Garden by Laura Mvula.

The song that made you feel like singing in the first place?
His Eye Is On The Sparrow. When Lauryn Hill sings it in Sister Act 2 (laughs).

Adding a link to the full version cause 30 seconds ain’t enough, man!

The song you wish you had written yourself?
I Can’t Make You Love Me by Bonnie Raitt.

The song that represents you the most (your state of mind, your way of being or your sound…)?
Oh well… Wrong or Right!