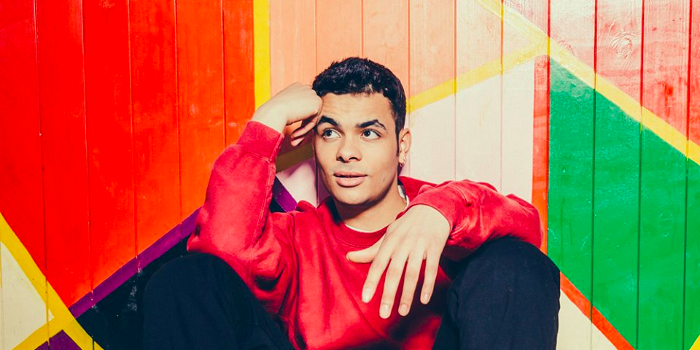 I’m writing this post in Brighton, where my friend Charlotte made me discover Ady Suleiman a year ago. I kept hoping that he would eventually cross the Channel to perform in Belgium and my wish has recently been granted — well, almost, as the British singer was Leon Bridges‘s support act in Leuven on May 13.

After watching him on stage along with his guitarist Ed Black and his bassist Eric Appapoulay, we met backstage at Het Depot, where I found a genuine quiet strength. Smiley and VERY talkative, Ady definitely seems to be cultivating a laid-back attitude. This also reflects the way he envisions his music, which mainly results from countless freestyles and jam sessions. Just as the unfinished songs in his early beginnings and his improvised trips suggest it, the 23-year-old artist goes where the wind blows.

And you can feel it through his songs, especially in his latest single Running Away revisited by the Jamaican Winta James and out since April 29. disponible depuis le 29 avril. The reggae anthem will also be released as a remix bundle on June 10, with the help of Chance The Rapper’s Social Experiment (Ady previously featured on Rememory along with Erykah Badu!).In the meantime, watch our interview to get some juicy details about the launch of his career, his upcoming debut album, his collaborations with SMV and Grades, his label imprint Pemba Records and his terrible experience as a DJ… And stay tuned for Part 2 in a week or so!