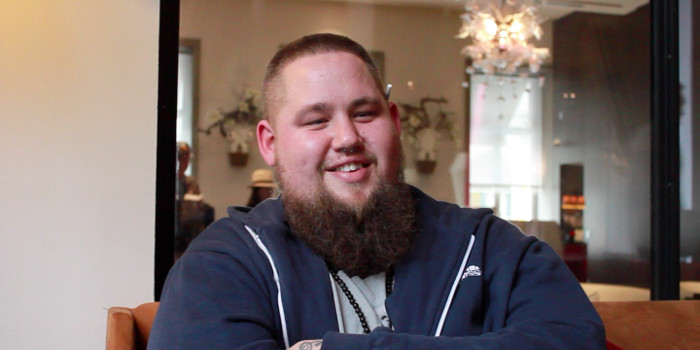 The first time you discover what Rag’n’Bone Man looks like, you might be surprised by the amount of music-related tattoos covering his body, whether it be the “soul” and “funk” dancing on his fingers, the guitar reaching for his arm, the microphone standing fiercely and conveniently next to his vocal cords or the bass clef hugging his ear. I guess you could say he’s got music under his skin. Literally.

But figuratively too. And this is something you quickly realise the first time you actually meet Rag’n’Bone Man. If you have yet to get the chance to have a little chat with the British singer, don’t worry: I’m totally willing to share our conversation so that you can see it for yourself. Step 1: make sure to catch up with the first part of our interview (click here for more details).

Step 2: grap a cuppa and check out Part 2. What you won’t see: Rory telling me about that time he went to Brussels on his own just to see D’Angelo perform as he couldn’t get tickets for his London gig and Rory asking me about this new Daniel Radcliffe‘s movie he’d like to watch on his way back home. I know, you’re really sad. But here’s what you will see though: Rory talking about how Brighton shaped him as an artist but also about his upcoming album, his favourite new acts, a charity project and his collaborations with Two Inch Punch, Jonny Coffer and Foy Vance. Plus me being completely and shamefully clueless about the latter (although I’ve been repeatedly told to listen to his music)!