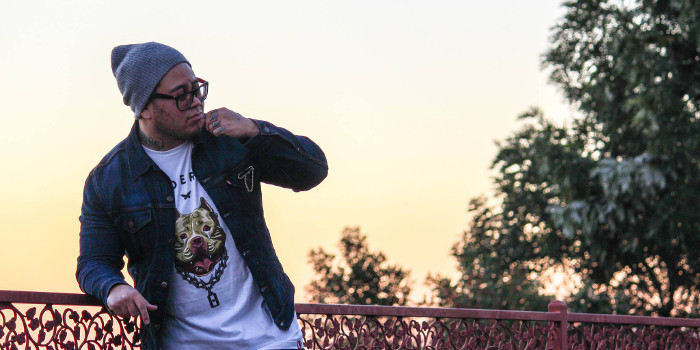 Last month, while I was procrastinating on Instagram, I learned that JBird, whom I met during my US roadtrip two years ago, had worked on Andrew Garcia‘s upcoming project. Just like Jeff Bernat with whom he previously collaborated, I didn’t know much about his music: occasionally, I found myself watching one of his video covers with the YouTube clique (Tori Kelly, AJ Rafael…) but… I’ve never got hooked.

Then Hell & Back – with tracks also co-produced by Jesse Barrera – arrived in the beginning of the month and I thought I should finally take a good listen to his work. As a good and broken (yeah, Christmas, my holidays in Reunion Island and the bills didn’t really please my wallet) wimp, I went on Deezer first… and I quickly took the plunge on iTunes after two songs. And when I say two, just know that the intro is included! That’s how fast I’ve fallen in love with this EP and I’m obviously not the only one as it was part of the top 40 R&B/Soul charts on the US platform R&B shortly after its release, without the support of a music label.

I have to mention that the 29-year-old is followed by a pretty impressive fanbase though, that he probably built up thanks to American Idol in 2010 (Tori and Todrick Hall auditioned for the same season) where he ended in the top 9. But then again, I might be quite a talent show addict, this program is one the rare contests that I don’t watch even though I saw a few of his performances. Bitchy alert: I wasn’t impressed. But as I’ve never been the kind of blogger who talks about things that I didn’t like, you gotta expect a twist in my story and this one happened a few days ago.

I can’t deny it: Andrew Garcia has always got a beautiful voice. But I was missing something, maybe more self-confidence, the perfect team, to suffer a failure to bounce back even better, or the right musical universe. And I think he found the latter but in its proper sense: instead of contenting himself to reign on the Milky Way, he took all the galaxies by storm. Indeed, Andrew’s versatily is limitless, starting with the themes of his songs which tackles both our generation and being a free spirit, as well as break-up, infidelity or sex. The EP also explores various sounds falling under the R&B category but under pop-rock too and, whatever the genre, whether the instrumental is acoustic or more produced, Andrew goes HARD. The vocal and musical arrangements are on point, with an Intro that could definitely belong to my Take a break playlist (in which all my favorite intros, outros and interludes ever are compiled) and a final and eponymous track punctuated by an ad lib that I wish to be infinite. Modulating tastefully his husky voice to bring softness and then power later on, Andrew Garcia managed to deliver an EP that every eclectic music lover out there should appreciate and play over and over again and which makes him part of the independent artists to watch out for in 2015.

Check these tracks asap: Intro (that’s how beautiful it is!), Cold World, Hell & Back.
Andrew Garcia Hell & Back, available on iTunes, Amazon and Google Play since January 1.