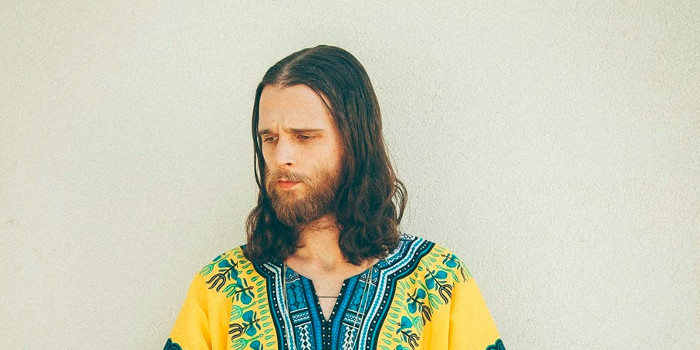 So in late January, I booked a city-trip to Portugal with a friend and I considered coming back to Brussels on April 18 but a little voice told me the 17th would be better. And here’s why you should always trust your instincts, ladies and gentlemen: about a week later, JMSN was announcing his very first Belgian gig, scheduled for the evening of my return! On D-day, straight out of the airport, I ran home, dropped my suitcase, freshened up, grabbed my ‘interview kit’ and took the first train going to Antwerp to meet with the guy I’ve spent many nights with (musically) since 2012. Don’t worry, I’ll tell you all about it once the proper feature will be uploaded next week. But in the mean time, here’s the traditional Urban Soul quiz, minus my two favorite questions, ’cause the stress+impress+stupidity factors combo made me forget (yeah, you can all boo me in the comments). Which is quite ironic as I was laughing at him when he was struggling to answer… That served me right, I guess. What I couldn’t get out of my mind though was that Cher‘s After All song that JMSN sang to me and which literally got stuck in my head for the entire weekend that followed (I actually almost dug in for my Cher’s best of ’cause YES, I have one!). Don’t say you haven’t been warned…

The last concert you attended?
Mmh… I’m trying to think back to LA… How come I can’t think of this right now? (laughs) This shouldn’t be this hard, right? Oh my gosh… Wait, wait, wait! Actually, when I was touring in Paris a couple days ago, there was Tropics! (Was that a French act?) No, he was singing in English, I think he was from… the UK. (ed.: jackpot, he is !)

The last album you purchased?
That was Black Messiah by D’Angelo & The Vanguard.

Three songs in your current playlist?
Mmh… Donny Hathaway’s Where Is The Love. Let me think… What was I listening to yesterday?! Oh my God! I was listening to that song on repeat yesterday and it’s probably why I can’t think of any other ones. Oh my gosh, this isn’t supposed to be this hard, isn’t it? (laughs) I can’t… Wait, I have my phone right here! Let me see… Oh yeah, Lenny Williams’ Cause I Love You. And Home Is Where The Hatred Is by Gil Scott-Heron… Ain’t It Over ‘Til It’s Over by Lenny Kravitz! (laughs) So good! After All by Cher. (starts singing and laughing) ‘After all that we’ve been through…’. That was good, right? Wait, how many was I supposed to give you?

The best song to seduce?
I know: R. Kelly. (sings the title) It Seems Like You’re Ready… That’s the one!

The best song to dance?
P.Y.T by Michael Jackson.

The best song to wake up to?
Here Comes The Sun by George Harrison.

The best song to lift your mood up?
Something from The Beatles… which is another George Harrison’s one.

The song that made you feel like singing in the first place?
Oh yeah, it was probably The Fugees’ Killing Me Softly. That might have been the one where I was like ‘Man…’. That or a Whitney Houston’s song. She has so many! Yeah… Run To You is a good one. But for some reason, that Fugees’ one always sticks out to me and I still sing it everytime it comes on.

The song that represents you the most (your state of mind, your way of being or your sound…)?
These are some hard ones! I don’t think about this when I wake up… (Usually people are answering faster than this!) (laughs) You act like I just think about these questions all the time! Like, ‘What song really, like… says everything about me?’ (laughs) (It can be one of your songs though.) Oh, it can? Then probably My Way!