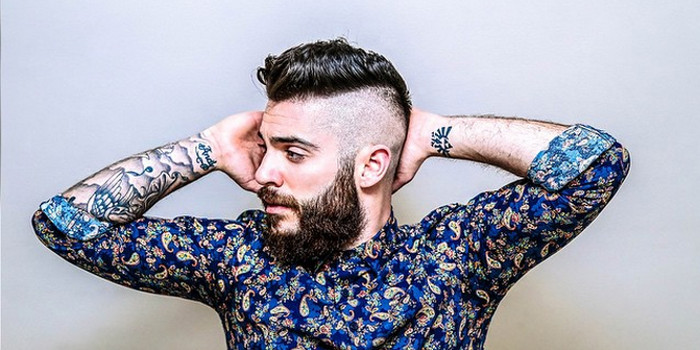 This month, I kinda felt like worshipping  Jon Bellion. Maybe his name doesn’t sound quite familiar and yet he’s responsible of two hits released these two past years… Now, do I have your attention? Fine, then let’s go back to the beginning.

Jon Bellion is a 24-year-old American songwriter, singer, producer and rapper. His brother, who’s 10 years older than him, turned him into a hip hop lover, while her sister showed him how to appreciate Death Cab for Cutie‘s alternative rock. Aside from these two influences, he would tell you that his ultimate point of reference is Kanye West. Inspired by his idol, he actually dropped out of college after one year to pursue his music dream. His father agreed but insisted he could only stay at home if he had a full-time job. So Jon worked in a catering hall for an entire year and managed to release a mixtape during his free time, in 2011:  Scattered Thoughts Vol. 1. Kara DioGuardi, a Warner’s A&R who signed Jason Derulo a record deal (and also penned songs for Céline Dion, Christina Aguilera and Enrique Iglesias), heard it and offered him a publishing deal. “Somehow [the mixtape] wound up with this intern, Matt, at Warner Bros. He flipped out when he heard it about it and took it to Kara who called me and said, ‘I can sign your whole crew. The guy doing the beats, the singer, the rapper, everyone’, he remembered for Interview. When I told her it was all me, she said, ‘I want to meet you in my office tomorrow!’. I ended up signing my publishing deal through her and for 18 months just focused on the craft of music making. A year later, I got my first placement, which was Monster.”

Indeed, Jon Bellion is responsible for the catchy chorus of Eminem and Rihanna‘s Monster, released in 2013. He also co-wrote and produced Jason Derulo’s Trumpets. The song was initially supposed to be featured on his sophomore album, The Separation, which came out the very same year, just like his debut LP, Translations Through Speakers.

By now, you’ve probably figured out that “lazy” is definitely not part of Jon Bellion’s vocabulary. Meanwhile, he signed to the independent label Visionary Music Group and unveiled an excellent third album called The Definition. “Translations Through Speakers was literally, I’m translating very spottily what my aspirations are, he explained to Complex. The Separation was, ‘Wow he’s kind of separating himself from everybody else. There’s something interesting that if he comes out with something else, I’m going to check for it again’. The Definition is, ‘Thank you for sticking with me. This is the finish line, now let’s begin’.”

This album seems to perfectly match his aspirations and he’s hella proud of it, boldly stating on Life + Times that “The Definition is better than the song Monster“. “It’s gonna take people a little time to realize, but this album is world-class. I would play this record for Kanye. I would play this record for JAY. I would play this record for Band of Horses and I wouldn’t care what their opinion on it was“, he adds. Some people might say this is vanity but I mostly think this is lucidity. Cause Jon Bellion has a very clear and accurate vision of his music and unsurprisingly — and just like he predicted, it’s indeed this album who truly helped him to make a name for himself. “[Back then] I didn’t expect, and it didn’t happen, to get on the Complex’s. I didn’t expect for Fader to pick me up because the music wasn’t good enough yet. I’m just that realistic of a person, he admitted in NYLON. (…) I dropped Munny Right and then all the blogs just came out of nowhere like, ‘We’d love to premiere everything!’. And I’m not going to say, ‘Fuck you because you didn’t fuck with me in the beginning’, because my records weren’t good enough in the beginning. Now my records are dope as shit“.

These tracks are actually so juge that he can now brag about how he sold out his first national tour, The Beautiful Mind Tour, last fall, just after a kick-ass performance at the Wireless in July 2014. May I add that he does EVERYTHING with his own means (but never misses on an opportunity to credit his musicians for pushing and inspiring him to develop his talent), whether to finance his albums (all available for FREE, you guys!) or his music videos (that he directs entirely or partly since Dead Man Walking).

Signed on the quiet to Capitol Records (he wanted to prove that he could keep his creative control even when working with a record company), Jon Bellion is currently orchestrating a new master stroke, judging by the quality of his three latest singles which ALL have the potential to reach the top of the charts (at least, this is my opinion): All Time Low (this is how I discovered him and I’m dying every time I hear that chorus), Woodstock (Psychedelic Fiction) and Woke The F*ck Up, uploaded this week. He’s scheduled to perform them live later this month in the US, during his Definition Tour.

Jon Bellion also managed to take some time to record Beautiful Now for Zedd‘s sophomore album, True Colors. Honestly, this isn’t my cup of tea (but I’m pretty sure many radios will give it a spin this summer) and if it isn’t yours as well, maybe you’ll enjoy his rapping skills alongside Blaque Keyz, his best friend and long-time collaborator. All in all, this great versatility and open-mindedness just proves once more that nothing can stop this guy who’s more than ready to take over the world!