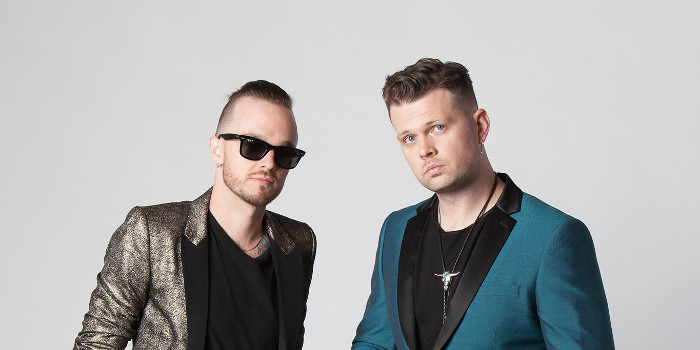 Here we go again: Alison has totally lost it, one more time (and I lost it so much that I’m referring to me in third person)… So the time has come to introduce you to my latest crush: Nicky Davey. Don’t be fooled by the name: there are actually two people behind it (and even more).

Davey Rosser comes from Nebraska, plays guitar (since 13 years old) and keys, and grew up listening to Neil Young, Jimi Hendrix and co, influenced by his father. At 20 years old, he moved to Los Angeles in order to pursue his musical dreams and will quickly get hired to record bass and guitar lines on several projets, including Lee Scratch Perry and Heavy D‘s, both nominated for Best Reggae Album of the Year at the Grammy Awards 2009.

Born in LA, Nicky Green spent his childhood admiring Stevie Wonder and Earth, Wind & Fire, inheriting along the way from his dad’s singing talent, the latter being a vocal coach who has previously worked with Michael Jackson, Thelma Houston and Ozzy Osbourne. You got it: on paper, musically speaking, Nicky and Davey seem to be perfect opposites but they found each other in 2008. Blending Davey’s country/folk/rock compositions and Nicky’s D’Angelo-esque soul cravings, the duet managed to find the right balance and as it turns out, their cocktail is absolutely disconcerting and delicious at the same time. Throughout the years, both of them learned a lot from each other and, for example, Davey would gladly tell you how Nicky taught him how to give an instrumental a Motown feel.

If it was only the two of them at the beginning, the Nicky Davey family has since expanded as the guys decided to recruit extra musicians whom Davey had been knowing for years.  au départ, ils n’étaient que deux, la famille Nicky Davey a fini par s’agrandir en recrutant des musiciens supplémentaires que Davey connaît depuis son enfance. Currently, the band consists in Misha Davidson on keys, Bert Gay on bass and Jamie Gamble on drums.

Between recording sessions in the studio and live performances in Baptist churches of LA, Nicky Green also managed to befriend The Internet‘s Syd Bennett. In 2013, she included Nicky Davey’s Cadillac in one of her compilations, starting to spread the word about them.

Later on, the same year, Nicky, along with The Neptunes‘ Chad Hugo, helped them pen Dontcha. “When we needed to get shit done, I have a guy, his name is Nick Green, he’s in a band called Nicky Davey back at home. He wrote Dontcha with me. Nicky Davey performs all around L.A. and I saw them live once and was like ‘Wow that’s kind of what I want to sound like’. I wanted to sound like that on Feel Good. So, linked up with them, wrote “Dontcha” and after that I was like, ‘Yo we got to keep writing'”, she told Watchloud in July, while her partner Matthew Martin thinks of Nicky as “family” or even “the silent member of The Internet”.

In December 2013, both bands materialized their friendship through collaborating on Timeless. Nicky’s dad even became Syd’s voice coach! More recently, this year, Nicky and Syd also joined forces on Gone, produced by SNAKEHIPS.

Nicky Davey’s singer eventually got a call to co-write and vocal produce Ego Death, The Internet’s latest album who ended up in Billboard R&B/Rap Top 10.

“And what about Nicky Davey? Where’s their own stuff?”, I hear you asking. Well, for starters, we got the song Sweet Valentine in February 2014.

Then they kicked off the new year teasing their fans on Twitter: “2015 smells G O O D”, they stated, before delivering on August 11 their intoxicating debut fragrance, the Nicky Davey EP. Rnb, pop and rock wafts are flirting with a lot of groove and incredible vocals as base notes to give form to a fresh and crisp modern perfume which should find its place on every shelf (and iTunes library), in my opinion. I gotta admit it: I can’t get enough of Been Lovin’ You, in which I’m soaking into every day, endlessly. The neighbors probably think this song is getting heady but I couldn’t care less!  And my favorite thing about all of that, is that each track comes with a different scent, whether it is the sexy Dreamgirl, the catchy and summery Gonna Love You, the electrical Hollywood or the moving Rainbows, which premiered in June after the US legalized the same-sex marriage. “Today is monumental to me as I was born in West Hollywood, CA to a gay dad and a lesbian mother, Nicky Green explained on Facebook. I am deeply honored and humbled to share that with you in this historic moment. The Supreme Court ruling on same-sex marriage marks not only a great step for the United States…but for all of humanity. To commemorate this amazing triumph, Nicky Davey, is releasing Rainbows for free download. This is a song penned straight from my heart. I hope that it brings those with a similar upbringing a sense of comfort and celebration. All we can do is pray that people with power indoctrinate love and acceptance versus hate and discrimination. That’s the only kind of indoctrination we should tolerate as a people! We are all one. We all come from under rainbows.”

With all these good vibes and intentions, Nicky Davey still has less than 1000 fans on Facebook at the moment… but this shouldn’t last long.  Especially as I’m counting on you and your great taste to listen, purchase, like, and then perfume all your friends’ houses with their debut EP!