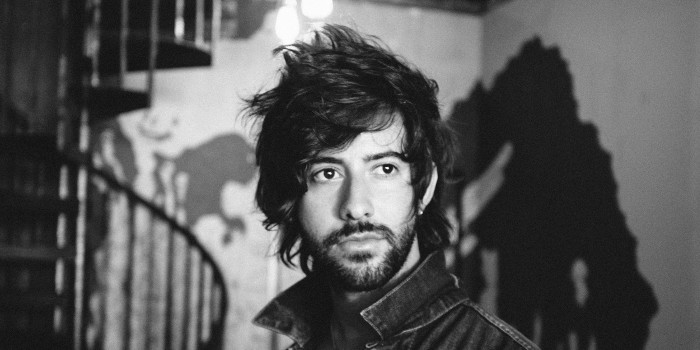 Every dream is a journey away but Bruno Major‘s journey was full of detours. However, the British artist enjoyed every landscape, every fellow traveller and even every little bump on the road, happily laughing at the mention of his late debut album. “You will never hear it, it’s in the vault of broken dreams”, he told me. Learning from every single experience, he paved his own way slowly but surely embracing life and music as they are, with all their little perfect imperfections. And this, ladies and gentlemen, is how the magic happens.

Make sure to catch up with the first part of our interview if you haven’t read it already!

___
You’re started guitar when you were 7 and your brother (Dominic ‘Dot’ Major from London Grammar) learned how to play drums and guitar quite early too. What was it like growing up in such a musical household? Was there a concert going on every day?
Yeah, we have been compared to the von Trapps! My Dad plays the guitar so there were always guitars lying around in the house. So I guess I just picked them up and started playing them. And then we had a piano so it was all very natural.

I think you got to play with Erykah Badu and Lalah Hathaway…
I did! I played for Lalah as part of her band which is a really great honour. And with Erykah, it was kind of a fluky thing: I was playing in Troy Bar in Shoreditch and she had a gig at the Hammersmith Apollo that night. She came in and just hung out and jammed with us. It was really amazing! It was weird because, at the time, there was this girl on stage singing – it was kind of an open mic thing where people would get up and call a tune and we’d play it. It was all kind of neo soul, jazz… So this girl got up and called Erykah Badu’s Tyrone. So we’re playing this tune and then Erykah Badu walks in the fucking bar! She walks all the way up to the front, sits in a front seat and then gets up, grabs the mic and just finishes the tune! People went nuts! It was crazy!

That’s awesome! So what did you learn from these experiences with other artists?
I think the only way you ever learned is from playing with people who are better than you. I learned an awful lot from playing with those people who are at the highest level of musicianship and I feel very fortunate to have lived these experiences. Playing with Lalah, the main thing I remember is that she sang through the set – and it was a two-hour live set – with just the most intense playing and her guitar player is a guy called Errol Cooney who also plays for Stevie Wonder so he couldn’t do this show ‘cause he had to go play with Stevie. So I had to learn his set and it was daunting because he was just so incredible. But I learned more in that two-week period of cramming than I had in my whole life! I also remember her singing a chord and me not believing what has just happened because I don’t know if anyone else can do that apart from her.

You started singing quite late – at 22. What did it take for you to feel confident enough with this skill? ‘Cause I guess the lack of confidence was what stopped you from jumping into this earlier…
I don’t really know. I think part of it is believing that you’re not gonna look like an idiot. But I always wrote poetry and I always wrote music so it kinda got to the point where I thought « Wait, I have music and I have words… I should probably just write a song! ».

Do you remember what was the first original song you performed and how did you feel at the time?
It felt weird at first. But then… You know, it’s funny ‘cause I spent so long learning how to play guitar and put so much work into it, and songwriting is really something that came naturally. I didn’t really have to figure out as much. It’s just something that came from inside of me and it feels very honest so… it was actually a good feeling to play those songs.

Following your Live EP out in 2014, you’re now releasing music fully independently. Are you aiming to keep it that way or are you open to getting signed?
It’s a very beautiful thing to be able to do whatever you want as an artist. I can release whatever I want, whenever I want, and I make actual money from it – it’s a really weird, cool thing! So I don’t know. Maybe someday in the future, but right now, I don’t think so.

I noticed a difference between your sound back then and the sound of the music you’re releasing now. The Live EP felt more folky and built around the guitar, as compared to your new songs. Was that a conscious choice to make the guitar less prominent?
Before, it was just a live thing so it was just me playing where these are proper productions. I guess it wasn’t really conscious at all – it’s just that I had never released something that was just a live thing before. So it was just me building the sound.

I thought it was maybe a case of you wanting to present yourself more as a singer than a guitarist and that’s why you would add the guitar last in your songs and making it less present.
I’ve surely not thought about it. I’m just making music and liking it.

On the side, you composed music for the Shakespeare’s plays As You Like It and A Midsummer Night’s Dream, you got a song in The Giver soundtrack, you wrote for SG Lewis and Liv Dawson…
Have you got my CV in front of you? You should work for the Secret Services! (I always say that! When my friend are crushing on a guy in a bar, I can always find him!) Wow… Watch out! (Yes, I should be a detective… So to get back to the question, do you approach music differently when you work on that kind of projects?) Yes, it’s different when you’re writing for somebody else ‘cause you’re channeling their feelings and their thoughts and you’re writing music that’s appropriate for their catalog. So yeah, it’s very different but it’s something that I enjoy very much and I’ve learned a lot from it. (How did you work on the plays?) Well, I composed the whole score for two shows and it was wonderful. The lyrics were already there, which is cool. So you don’t have to think of words, which is a nice thing. One is always plundering the depths of your emotional experiences all the time as a songwriter and it can get quite exhausting so it’s nice to just have words there and write to them for once, to let it flow.

Let’s talk about your own music now! I really love Wouldn’t Mean A Thing because of all those changes in the rhythm and we can hear your breath, your mouth and your fingers moving on the frets of the guitar… It feels so organic. I wanted to know more about the recording of that track!
I wrote it with my good friend Reuben James who’s absolutely, 100% genius! And we recorded those vocals, the humming, on the day that we wrote it. Then I went and recorded and produced it with my good friend Phairo who also did There’s Little Left and we just built it around from there. (So was it intentional to make the song so raw?) Yeah, 100%! I like all that stuff! I like hearing the imperfections…

So what’s in the works now? I saw you in the studio with Jimmy Napes, Disclosure, Frances… Are you writing for them or working on your own music with them?
I’m doing both all of the time: I’m working on my own music and writing for other people and just making music every day! (So who have you been working with for your own music?) It’s just me and Phairo. (What’s the plan now? Is there an EP or album coming up?) So the plan is to release a song every month and then accompany it with as many live shows as I possibly can. And the exciting thing about it is that it’s all being done in the moment so the song I got coming up on the 31st of October, I actually made it in October. (Are you thinking about making some music videos for some of them?) Yes, I think so, eventually. We’ll see…

I have a final question for you: how should your music be listened to?
Mmh… However the person wants to listen to it, I guess! Somebody once said – I don’t know who it was (ed.: it was actually Dave Grohl) – that the great thing about music is that you can sing a song to a hundred people and they will sing it back to you for a hundred different reasons.