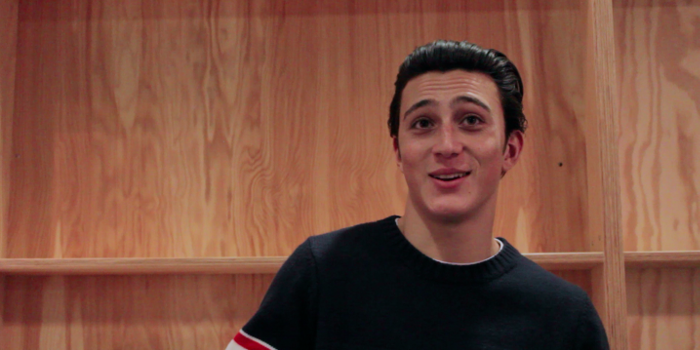 I know. I told you this interview would be coming “next week” and next week turned into more than two weeks. I have a pretty good excuse but you don’t wanna hear that. You want Zak Abel. I know you do!

In my wildest dreams, this video would have been filmed last year at The Great Escape in Brighton, outside, under the sun and I would have made this a ping pong interview, where Zak (who’s a former table tennis champion) had to give his answer while hitting the ball. Just throwing this out there in case someone decides to steal my brilliant idea someday. Unfortunately, when I met the British artist, we were in a rainy Antwerp, at the Maurice Coffee Bar, and while we were surrounded with a lot of delicious beverages and knits, there was no appropriate table in sight. I won’t complain about it, ’cause the truth is: I suck at table tennis (well, just any sports, really).

What I’m always happy to do though, is to talk about music. So that’s what we did. We discussed how it all started, his debut album Only When We’re Naked (out on April 21st!), his love for Fela Kuti and highlife music, his first trip to Morocco and we even spoke some French. In case you missed it, Zak Abel also spilled the beans about his favourite tunes ever which you can discover RIGHT HERE. Catch up, follow his playlist, pre-order the album and watch our interview!